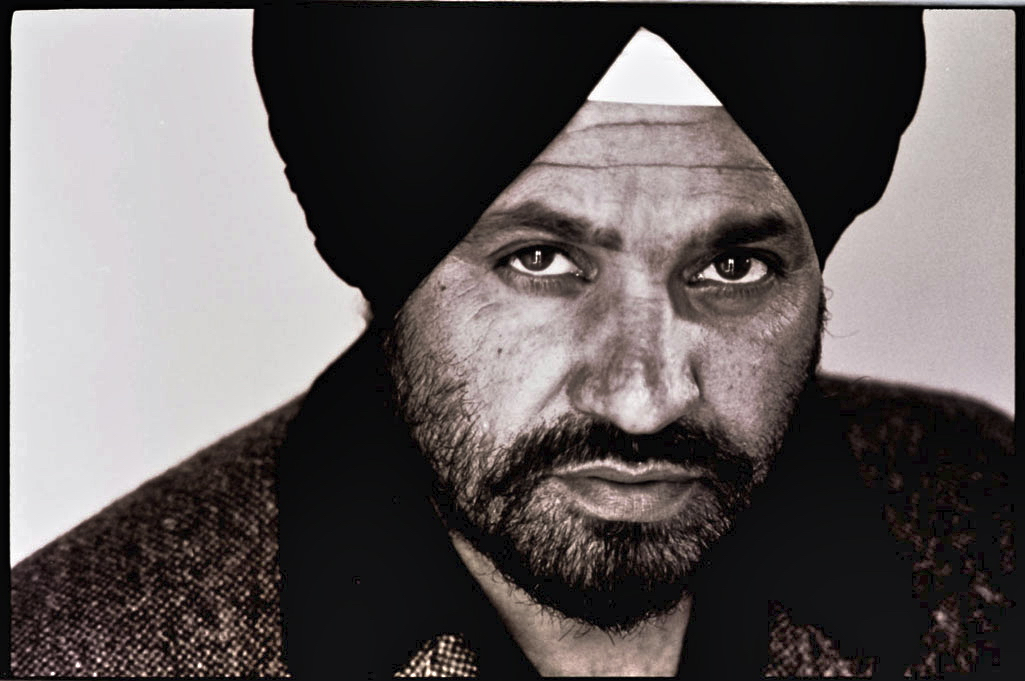 His nephew Charanjit Singh came from his village Lande and received the honour. 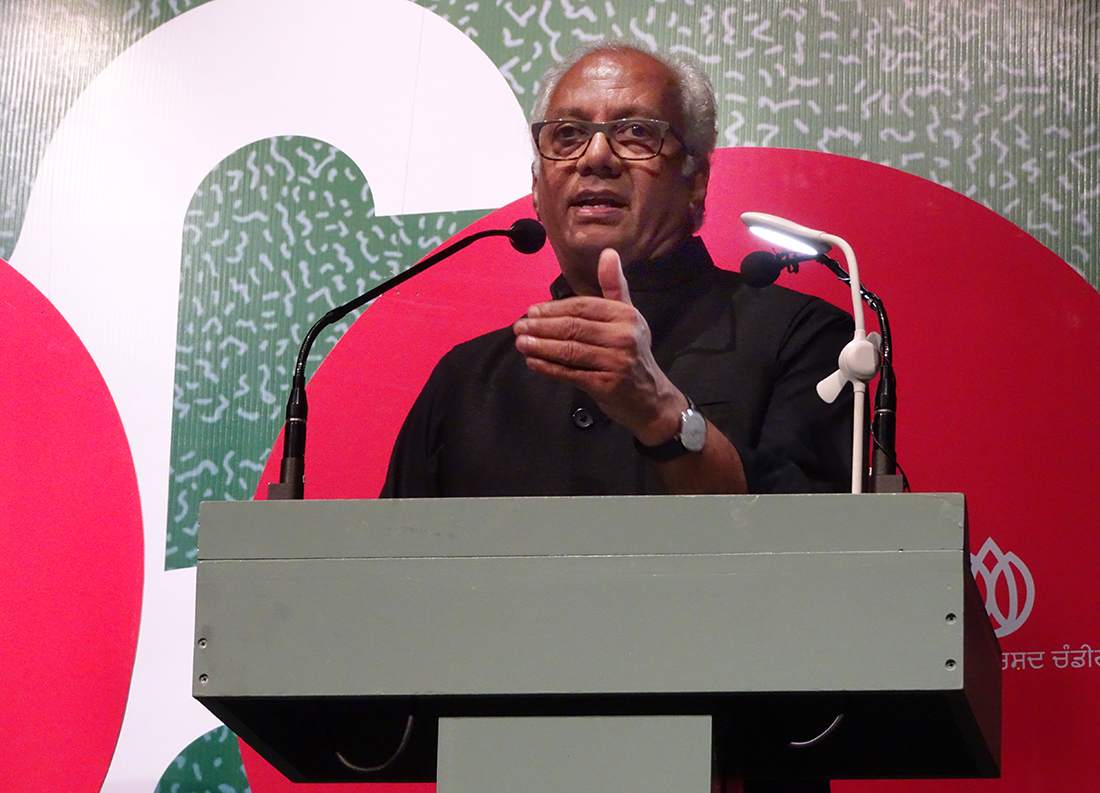 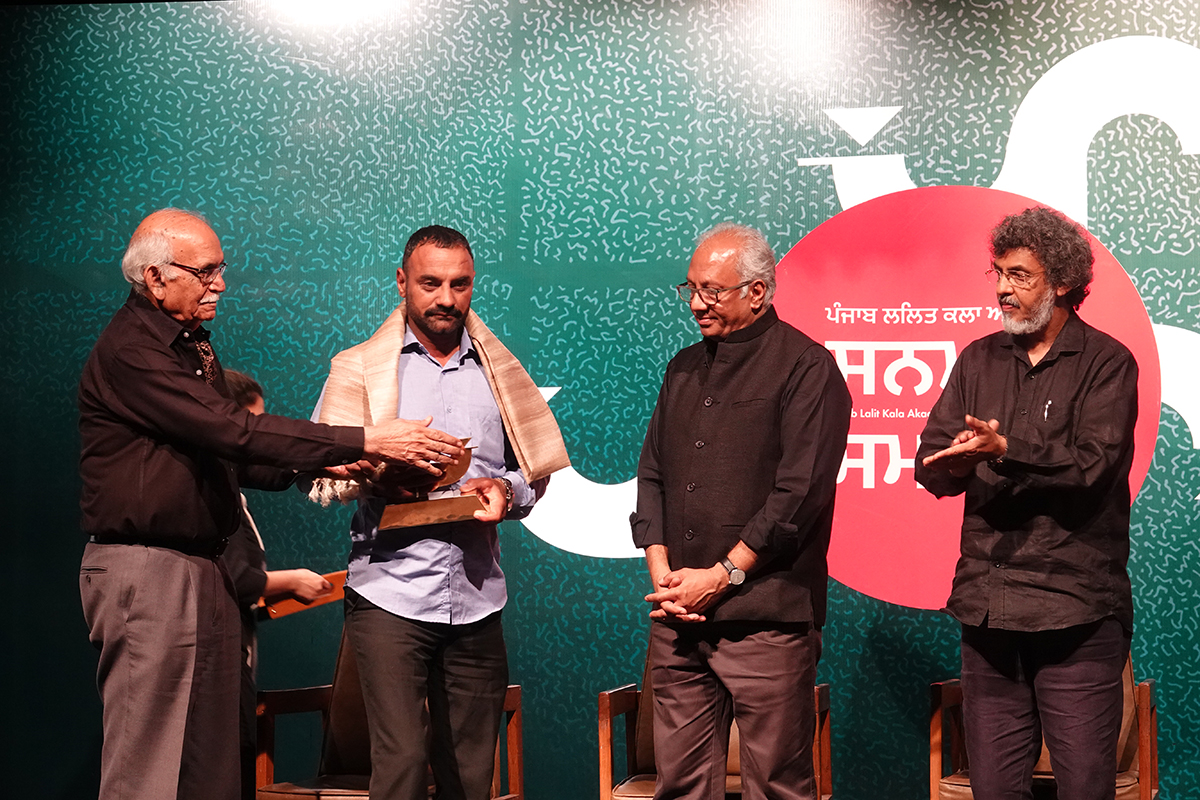 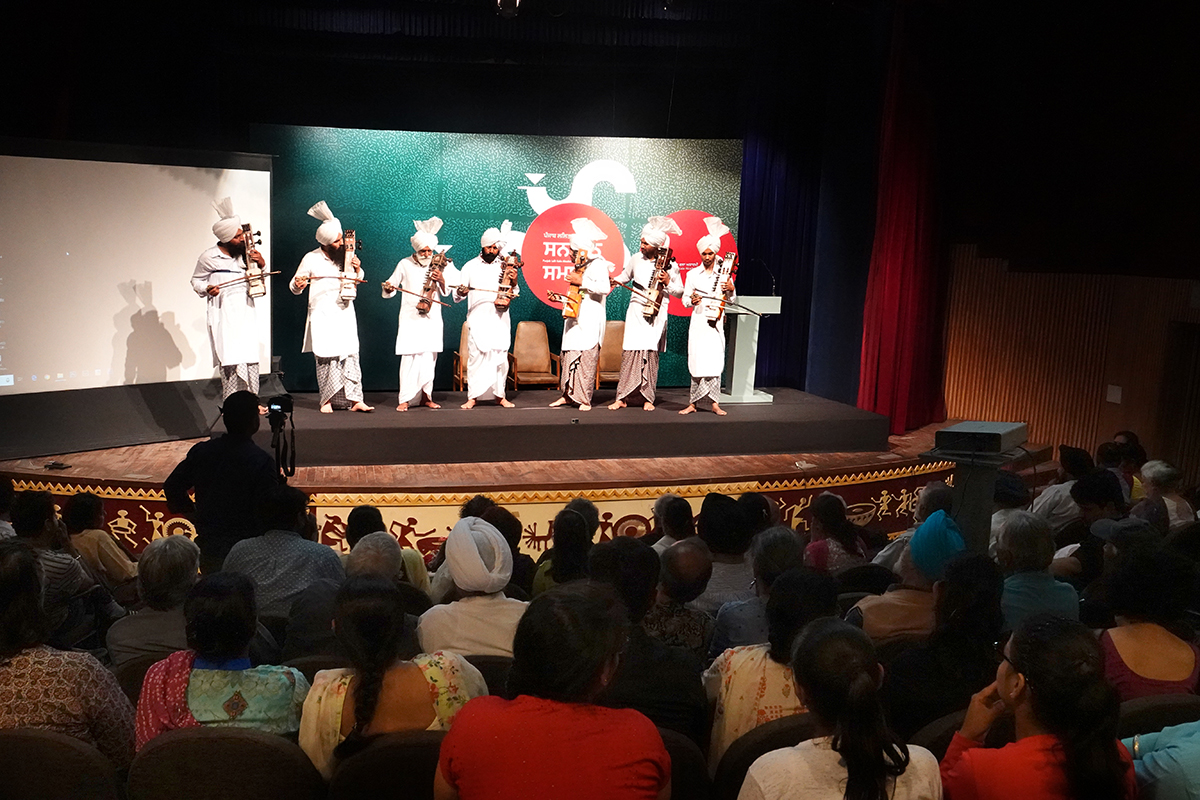 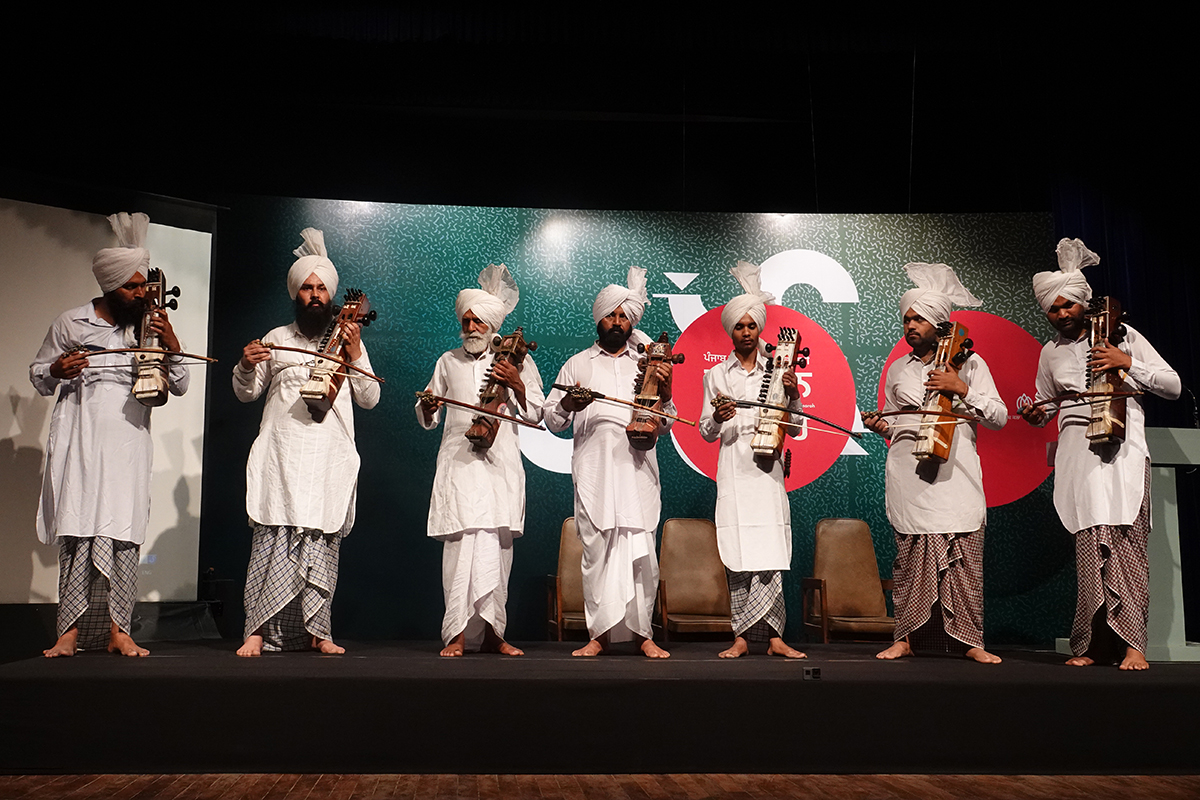 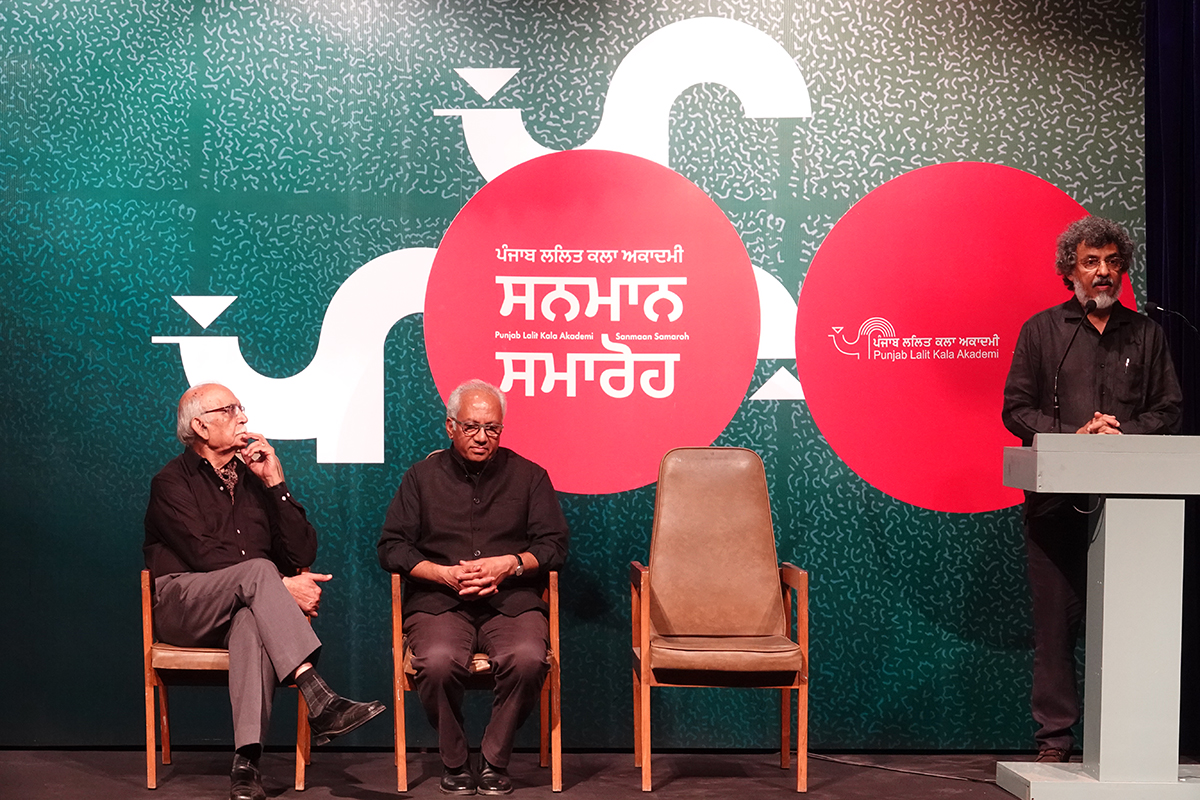 One of Punjab’s foremost artists, Malkit Singh, who passed away last year after devoting a lifetime to art, was born in 1942 in a sleepy village, Lande, in Moga district of East Punjab.  Tragic and gory stories of Partition, the trauma that people went through, the steely strength with which they picked up the threads of life again, the   agrarian life in close connect with farmyard animals, fish, goats and peacocks—all these elements formed the staple ingredients for his fertile imagination.Turning to drawing at an early age, he gained much appreciation from his peers and teachers for his sketches of animals and birds.

After schooling and a brief stint in agriculture, Malkit decided to take formal training in arts, much against the wishes of his parents who saw no future in art as a career.

The experiences that Malkit  encountered at first hand or through his interactions and empathetic observation found evocative expression in his paintings, often breaking the boundaries of time and space. His subliminal anxiety about the plight of the working class and the abuse and devastation of natural resources informed his choice of themes and images. On his canvas he responded to contemporary events, especially brutalization of politics, aggression and cruelty against women and miseries of poor people, yet in a manner that took them beyond the specificities of a particular historical event. Thus, when he expressed himself about Blue Star operation in Punjab in 1984, the paintings cut across time and space, empathizing with people under oppression. Similarly, Bulleh Shah singing from a  rooftop against a red background could be anyone, even an elder from  village Lande whom he heard while walking the streets or working in the fields, voicing  words of wisdom in the Sufi tradition.

He was convinced that every work of art enables us to look at our life and the world anew. Over the years, he explored drawing, sketching, water colours, oil on canvas and computer graphics, choosing a medium that suited his spontaneous urge to explore the possibilities of visual representation of a theme, situation or an idea.

Literature too remained a constant source of inspiration for Malkit. Gunter Grass’s novel, ‘Tin Drum’ appeared on his canvas with same name. Bob Dylan’s famous song ‘A Golden Road, No body on it’ became his muse on another canvas, questioning the meaning of prosperity and wealth sans humanity, and supporting the people suffering under imperialist regimes or capitalist socieites.

Malkit worked as a senior artist in the Post Graduate Institute of Medical Sciences, Chandigarh and  exhibited his works in many solo as well as group exhibitions world wide and his paintings are part of several museums and private collections. The recipient of several awards and honours, including the Punjab Lalit Kala Akademi award in 1978 and 1984, he contributed almost 2 decades to activities of the Lalit Kala Akademi as its Secretary and Vice-President. Malkit also contributed reviews, in Punjabi, of art exhibitions for Punjabi Tribune and other publications. After him, the vacuum of writing on art in Punjabi is yet to be filled.

His home was always open to people from his village, artists, poets, journalists and bureaucrats; his gentle and generous disposition earned him friends from varied walks of life and this amalgamated humanitarianism became an integral part of his artistic renditions. “Through my art I visualize and try to represent the intangible forms, feelings, and emotions that we live with; natural beauty, haunting harmonies, spiritual sublimity and frail paradoxes,” he had reflected. He may no longer be with us in body, but his spirit lives on through his commendable works.